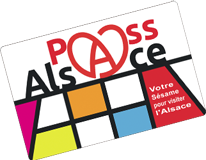 Located in the heart of the city, in the former 17th century Common House, the museum is devoted largely to textile industrial heritage.

An important textile centre since the beginning of the 17th century, Bischwiller gradually gained a reputation in this field: in the 19th century, the great national and universal exhibitions praised the exceptional quality of its textile production.

The museum presents the work of the textile fibre and its transformation, the large factories of the town and the life of the workers, and houses rich collections on the subject.

In addition to this heritage, the museum gathers testimonies of the local history, a panorama going from prehistory to the 19th century, through the sovereignty of the Dukes of Deux-Ponts, in the 16th century.

Open from the end of March to the end of December on Fridays, Saturdays and Sundays from 2.30 to 6pm.

Visit the Laub Museum in Bischwiller

Located in the heart of the city, in the former 17th century Common House, the museum is devoted largely to textile industrial heritage.